After 25 years living and working in Auckland I’ve moved back to my hometown of Whitianga on the Coromandel Peninsula. It’s a conscious return to my roots, the place where I was first inspired to pursue a career in music. With over 25 years of recording, production, performing, and studio management experience, I’m looking forward to connecting with new bands and continuing to work with the bands I’ve recorded in the past.

What really excites me is recording and producing emerging and established bands who are as passionate about their music as I am about capturing it and presenting it to their fans.

Being based in Whitianga allows me the freedom to travel to Auckland, Hamilton, Tauranga or anywhere else in New Zealand to record. Over the years I’ve established relationships with top recording studios around the country, so I can easily source an appropriate location for any given project. I have a boutique project studio in Whitianga so I can bring music back to a space that I’m familiar with for mixing. This flexibility to record at top studios and mix at my project studio ensures a workflow that is cost effective and produces the best quality recordings.

So…How did I get here?

Before returning to Whitianga in 2019, I was Studio Manager at Depot Sound Recording Studio in Devonport, where I honed my production skills by working with a wide variety of bands including The Warratahs, Push Push, Head Like a Hole, and Hamilton County Bluegrass Band.

Prior to this I spent 8 years working at Stebbing Recording Studios where I learnt from some of New Zealand’s top engineers and had the pleasure of recording music for Six60, Topp Twins, Hollie Smith, John Rowles, Shane, and many more.

Back in the ‘90s and into the mid 2000’s I spent 9 years working for Pagan/Antenna records where I made NZ music radio programs for commercial radio while working alongside Tadpole, Darcy Clay, Pluto, Voom and other bands on the label. During this time I also recorded bands at York Street and The Lab including Blindspott, Stylus, These Four Walls, and others. 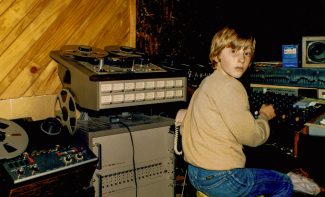 In 1985 I went to a recording session with my Dad and fell in love with all the flashing lights and sounds!